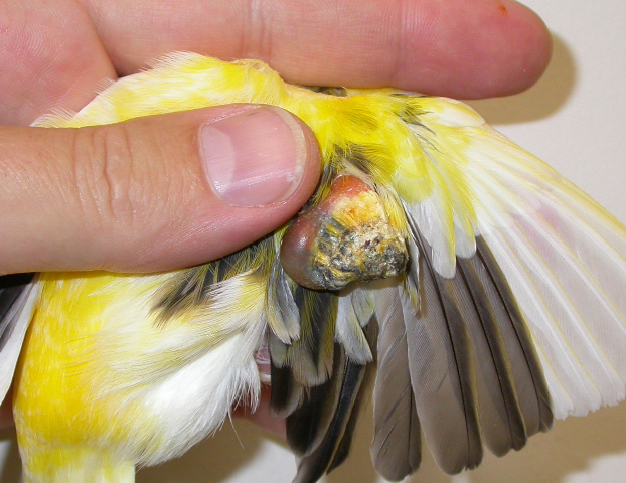 What would a bird be without its beautiful feathers? They serve as protection from the environment, provide cooling and warming, attract mates, display territoriality and of course are used for flying. Sometimes they do not grow perfectly.

What is a feather cyst?

A feather cyst is equivalent to an ingrown hair on a human except it is much bigger (as a feather is a much bigger structure compared to a hair). The cysts form due to malformation of the growing feather within the follicle, which is located under the skin. A feather cyst occurs when a growing feather is unable to protrude through its natural opening in the skin, and curls up within the follicle into what is sometimes a gnarled up feather mass. Feather cysts appear visibly as oval or elongated swellings involving one or sometimes multiple feather follicles. They may occur anywhere, but are most commonly found involving the primary feathers of the wings. Canariesget large multiple feather cysts on the body as well as the wings.

"They may occur anywhere, but are most commonly found involving the primary feathers of the wings."

As the feather continues to grow the cyst enlarges with the accumulation of a yellow-white keratin material. They can become quite large. Causes of feather cyst formation include viral and bacterial infections, malnutrition, trauma, picking and self-mutilation and any other factor affecting the growth of the feather.

All birds can develop feather cysts but the highest incidence is in Blue and Gold Macaws, budgies (budgerigars) and certain breeds of canaries (i.e., Glosters, Norwhich, and Borders). In canaries, there is an apparent inherited predisposition.

What can be done about Feather Cysts?

Many small feather cysts can be gently squeezed out. This is not a cure and will have to be repeated as often as the cyst forms. They can bleed rather badly, so treatment should be done only by a veterinarian familiar with birds. Bothersome cysts, cyst involving self-trauma or recurrent infections can usually be surgically removed.

Your veterinarian should be involved in the care of feather cysts.

This client information sheet is based on material written by: Rick Axelson, DVM

© Copyright 2009 Lifelearn Inc. Used and/or modified with permission under license.